In theory there are 6 devices available externally. On top of that the GPS, 3G and Touchscreen need AT LEAST one serial port each. The driver for the serial multiport card will start assigning from the next available com port BUT it seems like the order is preserved. EG if it starts at COM5, Com5 is the first port. Same if it starts at COM6 etc.

I managed to grab one of these for  good money a few weeks ago. I’m not sure what it’ll get used for but it seemed like a good idea to see if Tezero would be ok on it.

First up this one had no cables, no drive or drive mounts. This is the first challenge.

Although it uses a dual link DVI connector dont be fooled. This connector is a custom LVDS connection, you need to use the supplied monitor. There is an SVGA connector under the board but I dont have the pinouts for this. Finding them will mean dragging the scope out and I wanted to avoid this. Once again, its a DUAL link digital cable. Using a single link or analog cable wont work. Using a DVI monitor will also, not work. Assuming that the LVDS connections are directly driving this port you might even kill the LVDS drivers trying. I didnt but I may have been lucky. 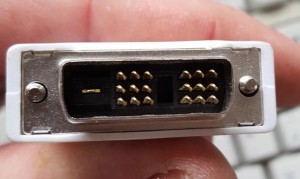 This is a single link DVI cable, it’ll power up the monitor but it wont work! 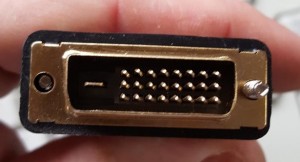 This is the one you need, known as a dual link cable

Next is the power connector. This is a standard 4 pin molex as per the PC 12Aux connector from an ATX PSU. I’ll pop the pinouts up in a lil while. A word here, these things are very picky about supply voltage. If you supply under 12V they wont even try and power up. 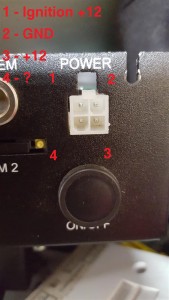 The pinouts as far as I’ve been able to discover.

This is all you need to get it powered up. The ? pin goes to an optocoupler and I suspect is for the brake/handbrake input. Pin 1 must be pulled up to +12v to get the unit to power on. If it is allowed to go low the unit will shut off after a second or two. There is no load on this pin as this is all carried by pin3. This is used to charge the internal pack and run the unit. A 5A fuse in this line would be good. The PSU *MUST* provide a good quality output, I had a LOT of issues getting going and it turns out it was mostly down to PSU issues, I was using an ATX PSU and the +12V was ocasionally wandering down as low as 11.4V which was enough to upset the unit. 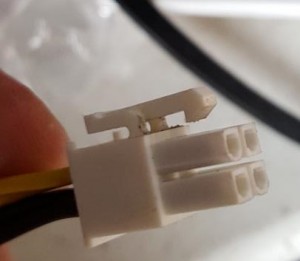 I reused an ATX Aux12V connector to get running. Realise if you do this that the colour codes are totally and utterly wrong!

Internally you have a plethora of hard drive options, however here you’ll hit the fist real snag. The SATA headers will recognise an optical drive, but they wont boot from it. The IDE header is also 2.5″ IDE so unless you have an adaptor cable thats not going to happen either.

You’ll need a 2 pin molex minifit to get +5v power for your drive if you are going the SATA route, in my case I’ve used a 32Gb Team SSD. You could eaqually use a CF card. Soldering in a SATA power connector is an option as below. However this will ONLY work with Laptop drives that only use +5V 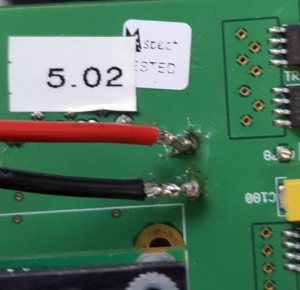 Now, there is a SATA connector on the Terrafix board, the aforementioned 2.5″ IDE header and a CF slot. There is also a CF slot on the CPU card and two SATA ports. The CF card slots are bootable as are the SATA ports, although the ones on the CPU card seem more reliable. USB Booting does not work, network booting definately does.

The CPU on here is an AMD Geode at 500MHz, so realistically with the 512Mb of ram you are looking at Linux or XP. 7 *might* boot but based on experiences with Atom based machines, it wont be much use. If going the XP route then look at XP Embedded. its still supported and is undoubtedly the way Terrafix went. A low footprint Linux install would work too.

Setup Time
Heres the good news. Windows 7 PE wont work. Win XP PE *might* but I have no means to test it. Bootable USB media doesnt work and booting off the IDE header seems to, there is another BUT here. You are going to need the VIA VT6421 drivers. You can either slipstream these in with nLite OR if you can find a USB floppy drive and a disk, do it that way. If you are going the Linux route I have tested Debian and it went on with no real issues. I have made an image with nLite thats missing a lot of the cruft and is tweaked specifically for this sort of application however you will need an XP Pro licence key and you need to bear in mind XP is discontinued. I may upload this later.
If you have a 2.5″ to 3.5″ adaptor its not all plain sailing, it seems that the header they have used is a bit too narrow for a standard laptop IDE header, I had to shave the edges of mine down a little with a scalpel. I pulled +12V off of the PSU I was using and picked +5V up off of the IDE cable. A good ground is important too, dont rely on the ribbon.

Alternatively you should be able to use a USB drive, the BIOS supports USB CD-ROM, Win XP will setup fine from one however I only have a DVD drive which it doesnt seem to like. You’ll need a powered drive too as the power output of the USB ports is pretty low.

You *could* in theory use another machine, do the OS install on there and move it over, however you are going to hit the same driver issues when you move it over. Unless you have something with a VT6421 controller in (Its an OLD chip) this is probobly not the best way.

There is also provision for a reset button which may be handy while setting up. Simply short the pins. 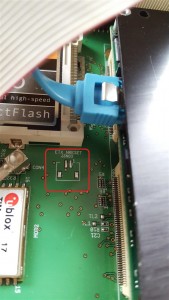 I had issues with corrupt didsk, lockups and all manner of silliness, this all seems to have been caused by a combination of PSU issues as above and a bad stick of ram.

All the drivers are available. I’ll likewise pop these somewhere however there seems to be an issue with the multi port serial and possibly the modem too. This could be the bit that causes issues.

Not one of the serial ports seems to do anything, in addition the modem must be powered on. if it is or not, there’s no way to tell but I suspect there is some funky stuff going on with the Altera CPLD under the processor board. it may be there is an inhibit line there that needs tweaking. For now I need to get the scope out and see what comes out of the UART and where it goes.